Home - Articles - Getting Started - How much iodine do I take? 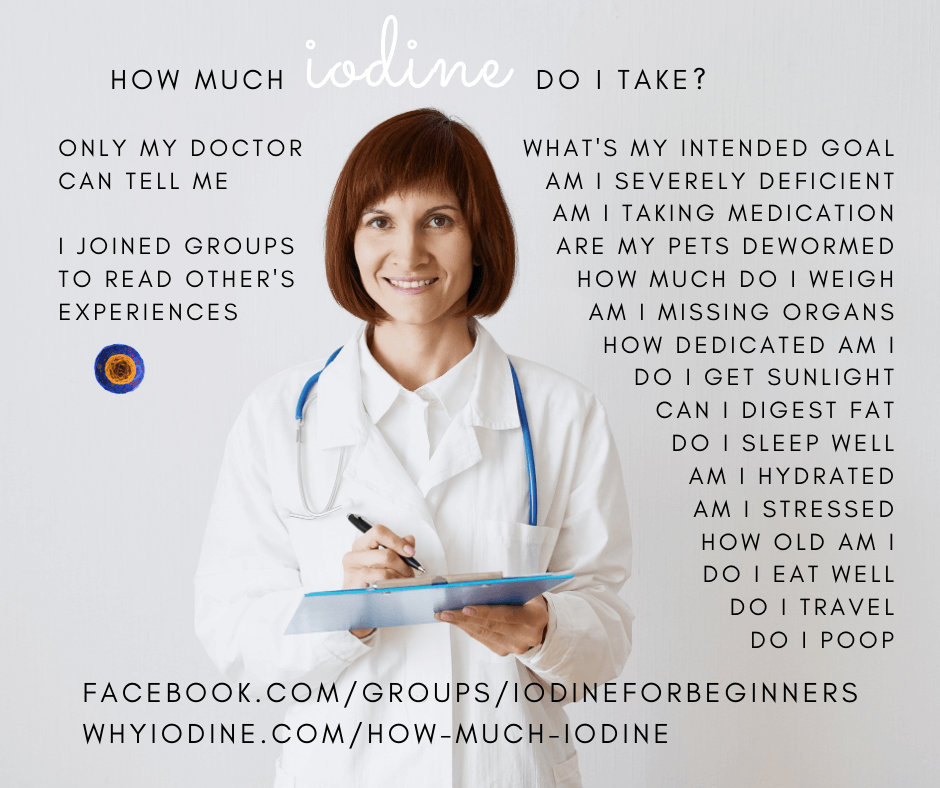 Somewhere along our journey of starting iodine, we’re going to come across a fundamental question. How much iodine do I take?

This image with a list of variables to consider is just a fragment of the potential details that alter how much of which substances someone should and shouldn’t take. Due to these potential variables, it’s a good idea to understand why we’re taking certain doses ourselves, instead of depending on other’s experience or opinion.

Although this situation can seem complex, it can be broken down pretty simply.

Some of us have lots of toxins tucked away somewhere, and a weakened detox ability to process them if they were to be dislodged.

Some of us have a few specific toxins that seem to be causing specific issues. We might still have a decent ability to process things, and we might even eat well, but the specific toxin is stuck somewhere causing damage.

Those of us with lots of toxins tucked away and weak detox paths, are most likely going to have a rough time with high dose iodine.

Those with more specific issues can most likely withstand the higher doses by wrapping those toxins in fat without being overwhelmed by too many at once.

Sometimes it’s not easy to figure out how toxic we are, even if we run a lot of tests. This is why I’m a big fan of going low and slow while figuring out which nutrients my body is looking for as I hit pockets of detox.

More of my opinion

I’ve been researching iodine since 2015. I spent about a year reading other people’s experiences before I started. I started low and moved up slowly, and when I hit detox issues, the community’s only input is to take more iodine.

I tried high dose iodine and found myself in a heavy detox. After trial and error and a lot of research, I figured out how to get a handle on the situation and finally feel better.

As I’ve continued to participate in the iodine community, I’ve noticed people going through the same situation that I did at various doses. I share what I’ve experienced in an attempt to help others understand what might be going on here.

Some people are just taking tiny amounts of iodine, possibly with or without supporting nutrients, and staying there at 100’s of mcg, that’s it.

Getting tiny amounts of iodine and other nutrients may be better than nothing. But some people are using pretty large amounts of iodine and other nutrients for years in order to clean out some potent toxicities. Starting iodine at these lower doses and hanging out here for a few months may help prepare our cells for more cleaning with more iodine, but staying at tiny doses isn’t going to do much against the toxicities we face today.

This is almost like slowly spraying a wall with paint thinner, allowing it to loosen a little paint and then just leave it without wiping or scraping paint away, repeating the same process tomorrow. This doesn’t ever get anything accomplished. Maybe we just leave the wall alone till we’re finally ready to attack it properly.

I started the supporting nutrients for about a week, and then I tried 1 drop of Lugols 2% on my forearm. I waited about 24 hours just to see how my body responded. Then I started 1 drop of 2% in a glass of water per day. Then each week, I added 1 drop of 2% to my daily.

Anytime I ran into detox, I would pause iodine and look for nutrients that helped me with whatever symptoms I was feeling. This was working great, but then I tried high dose..

A few months into this at about 35mg of daily iodine, I started getting the same symptoms that lead me to iodine. I panicked a bit because I didn’t like the way those symptoms make me feel. Without knowing what else to do, I tried the community’s suggestions of higher doses of iodine.

Over the course of almost 2 weeks, I consumed close to 2,000mg of iodine total. I wasn’t feeling better and continued to feel off, so I stopped. 3 days later I woke up feeling like I was hit by a bus. Long story short, I dislodged a ton of mainly mercury. I laid on the couch assuming I was dying for a week, and then happened to eat 6 hard boiled eggs one night and woke up the next morning feeling 80% better. This led me to realize mainly the sulfur and zinc in the eggs bound to the mercury I knocked loose with iodine and allowed me to digest/clear it. For the next month, I used epsom salt and black sesame seeds for sulfur and zinc etc, and had to be careful how much I would take or my butt would burn to much from the metals being passed.

I was lucky to find the nutrients that happened to work for an acute poisoning from high dose iodine knocking loose a hidden toxicity.

So now, what I think makes the most sense for increasing my iodine levels, is only getting as much iodine as my body can currently handle the detox of. I listen to the detox symptoms and use them to find the nutrition my body is asking for, instead of blasting past it with high dose, which only seems to wrap it up in fat temporarily till we stop taking iodine daily. If I can’t seem to find nutrients that help me push through a detox phase, maybe my body is saying it doesn’t want more iodine right now? Unless I’m in a hurry to move toxins around, why take more just to bypass a toxic temporarily?

I think the amount of iodine it takes to be high dose for each person depends how many toxins they have tucked away. But the general idea is starting at 50mg of Lugols. But even starting above 12.5mg is still pretty high dose.

High dose caused me to dislodge a potent toxicity. But I think I had previously set myself up for the situation just about perfectly.

I started eating better and supporting my gut several years before my health crashed. I had also started consuming unrefined salt for a while, and then increased that even more as I started the iodine protocol. So after 3 months of the supporting nutrients and decent amounts of iodine, my cells were more able to rapidly exchange everything as I introduced the large amounts of iodine.

I have a feeling high dose iodine is able to dislodge toxins vai additional gene activity as well as apoptosis, and wrap them in fat. I think as we continue to take that amount of iodine, we’re able to hold onto those toxins suspended in fat. This may come in handy at clearing a specific issue, possibly helping us clean up situations that may otherwise require invasive interventions.

But we’re still carrying around the toxins, and we still don’t have the ability to process them and get them out. So if we reduce or stop iodine, and those toxins are not longer suspended in fat, they are just going to go right back into cells. Over time as we carry them around, they are probably able to get back into our system as well, unless we happen to support the systems that help get them all the way out.

Pulse dosing is the idea that we figure out how much our body wants of a specific nutrient. It also allows our body to use up the nutrients so levels can come back down, avoiding potentially getting a bit too much of certain nutrients.

Over time, I realized I only need to take a 200mcg selenomethionine two to four times a month. If I take it less than that, I start to feel symptoms, and if I take it much more than that, I feel symptoms of overload. I recently tried a different form of selenium, which is only 50mcg, so I take it every few days.

On average, I only take about 6mg of iodine daily and don’t even take it every single day. And then once a week or so, I’ll take a larger dose of 20 or 50mg just to see how my body responds.

This is similar to watering houseplants. If we don’t water them, they dry up. If we water them too much, they leak or become water logged. But with practice and observation, we can find the sweet spot in the middle.