Sulfites are much more common than we may realize at first. A lot of food and drink have small amounts of it which makes it much easier to accidentally and unknowingly load up on sulfites. But by understanding the situation and keeping an eye out for these foods, we may be able to ease one of many burdens on our cells.

Some people’s biochemistry does not allow them to process sulfites well, and some of us don’t get enough of the nutrients required to run the biochemistry that processes sulfites.

While we’re trying to heal, or looking into pushing detox, staying away from sulfites, and supporting the systems that process them can be very helpful.

Do you suffer from any of these ailments? Keep them in mind as you progress through your own detox and healing, or watch others complain of similar situations. 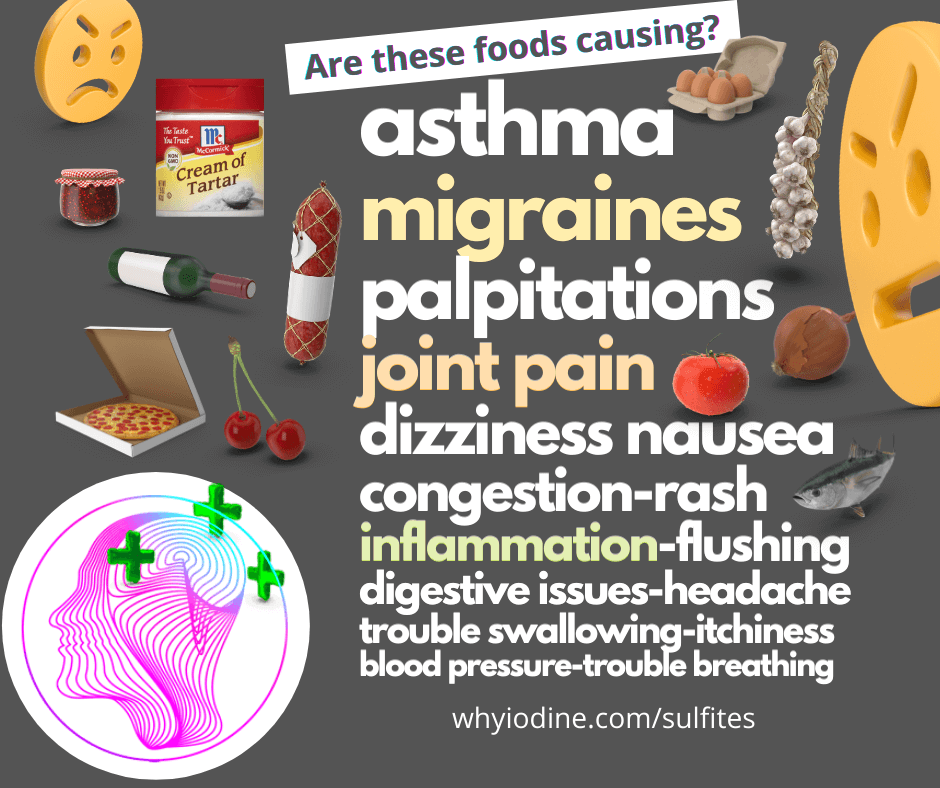 Sulfites can cause a lot of reactions

Exposure to sulphites has been reported to induce a range of adverse clinical effects in sensitive individuals, ranging from dermatitis, urticaria, flushing, hypotension, abdominal pain and diarrhea to life-threatening anaphylactic and asthmatic reactions. 1

If you are asthmatic, your chances of being sensitive to sulfites are between 1 in 20 and 1 in 100  2

Doctors say in some people, sulfites have triggered severe asthma attacks, but in recent years, sulfites are also being linked to an increase in migraine headaches, heart palpitations, hives and even joint pain.3

When someone finally consumes enough of the foods, beverages, medications or supplements I list below, they could potentially have a severe asthma attack?

That’s rather alarming. What if people afflicted by severe asthma attacks are simply exposing themselves to enough compounds to finally overload this gene and cause a reaction?

How is Cream of Tartar involved?

Cream of Tartar is a food ingredient commonly added to cookies, eggs, candy and other baked goods. It’s also been commonly recommended in Facebook groups in something called an Adrenal Cocktail to supplement potassium. It’s also great at cleaning brass and other metals.

To keep microbial activity down in wine making, as well as anti-oxidize the wine, sulfur dioxide is used.4 This ends up creating sulfites in the wine, which end up in the tartaric acid used to create Cream of Tartar.

Sufiltes are so common in wine making that some people claim wine without sulfites would be completely different chemistry 5 This means any Cream of Tartar created from wine will have some level of sulfites.

The best alternative to Cream of Tartar is fresh lemon juice. Use twice as much lemon juice. Vinegar, buttermilk or yogurt can substitute as well. Organic baking powder also works.

What is a sulfite?

A sulfite is the result of Sulfur Dioxide chemically reacting with something. The end result of this happens to benefit various profit generating processes in some way. Along the way, it carries out various, most likely partially unknown reactions with nutrients in our food.

Sulfur dioxide destroys Thiamine 6 which is just one example of the potential damaging effects of sulfur dioxide’s use in food. Thiamine(B1) is an extremely important nutrient that most of us most likely need more of. Without B1, our mitochondria are not so happy. Our mitochondria are what generates the energy a lot of processes our cells use to run our metabolism.

What causes us to react?

As we breathe sulfur dioxide or absorb sulfites with our skin or eat foods with sulfites, our digestive system has to process them or they will end up trying to react with our cells, which is where we can start having reactions.

Our SOUX gene reduces sulfites into sulfates so our body can finish processing them. Without a nutrient called Molybdenum(Mb), this gene does not function properly. If we react poorly to even natural food based sulfur compounds, we may possibly need a bit more than molybdenum to get everything we require running again. The core of our methylation system may need some work. My other website gets into the basics of this https://sickoftired.com/methylation/ 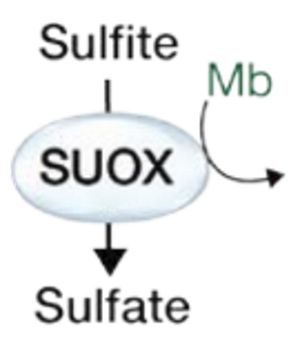 We’ve known about some of the negative reactions associated with sulfur dioxide’s use in food since the 1970’s, but we continue to use it in many foods and drinks. (It’s almost like profit is the main focal point in everything.. almost)

Can we seriously assume a person with asthma or all the other symptoms has not been exposed to any of these foods or ingredients? And can we really assume sulfites were ruled out?

Several people in my family suffer from asthma related conditions and I have suffered from a handful of these sulfite symptoms. The only thing I knew of or ever heard from anyway else to avoid, was wine.. I would have gladly avoided the rest of these foods to attempt mitigating the migraines and headaches I’ve been through.

Cask wine has higher sulfites than bottle. White wine has more than red.

Notice anything interesting in the names of these preservatives? Other than the Sulfur Dioxide, these are sulfites, which are the product of sulfur dioxide. And they are bound to electrolytes.. I wonder if this type of reaction has the potential to happen inside our body? I think it does, and I think it causes electrolytes to become trapped in a toxic form.

They also have a number of industrial uses, including in the photographic and textile industries, where people have negative reactions to them as well.7

What does this have to do with iodine?

I put this page together to explain the situation with a popular method of supplementing electrolytes and supporting adrenals. There has been an increase of people recommending a drink called an “Adrenal Cocktail”, which commonly recommends using Cream of Tartar, which almost always has sulfites in it.

Most of the people using this drink are attempting to heal issues that Cream of Tartar and its sulfites might be causing. The adrenal cocktail and other foods may not cause a reaction in everyone, but I’ve already seen several people with an instantaneous reaction. By consuming this large dose of sulfite containing powder, it’s very possible that someone not usually sensitive to sulfites could eventually create an issue. Our genes can only work so fast, and then they max out and we experience symptoms. As we detox with iodine and nutrition, we may also cause a similar situation as we run low on available cells to keep up with everything we’re trying to do. Detox is for long term benefit, but in the meantime, part of our energy and ability is diverted to situations just like this one.

If sulfite sensitivity seems to line up with a lot of our issues, we now have a target system in our metabolism we know needs some type of support. With so much new information becoming available about the nutrients our genes require, there will most likely be information that helps us clean up our system and move forward.

Any mainstream medical articles I’ve come across claim we have to avoid sulfite containing foods for life. But they fail to mention molybdenum being a co-factor of the SOUX gene. What if most people are just very far behind on molybdenum, or are not able to utilize it currently for some reason? There are other deficiencies that can hold back the SOUX gene, but this starts getting into general methylation and sulfuration issues. I’ve started pulling information together about methylation on my other site https://sickoftired.com/methylation/

I used to get migraines if I would have more than one glass of red wine within a few months of each other. So I was excited to try molybdenum drops in hopes that it would help me with this situation. Now I seem to be able to drink wine without feeling the oncoming symptoms of a migraine anymore. I barely used much of this stuff. I’ve probably taken less than 30 drops over the course of several months.

Molecular basis of the biological function of molybdenum: the relationship between sulfite oxidase and the acute toxicity of bisulfite and SO2

I originally tried Seeking Health’s molybdenum in their Optimal Liposomal Glutathione Plus, and started noticing a lot of my sulfite related issues resolve. So I grabbed a bottle by itself to help keep my levels topped off.
Shop Molybdenum

The author proposes that Mo deficiency in humans makes them susceptible to the potential neurotoxic effects of dietary xanthosine, inosine, and sulfur amino acids, and it is the combined effect of these three substances that produces SC-ALS. The following circumstantial evidence supports the notion that a large number of humans are Mo deficient, hence, at risk of this disease..8

In this article about molydbenum and Parkinson’s disease w/dementia https://www.nature.com/articles/s41531-018-0045-5 they mention “purine loading” causing symptoms of these horrible conditions, but only when molybdenum was low. This seems to be the same situation where we can process the purine if we have enough molybdenum, but otherwise it will remain in a damaging state that degrades our body. Purines aren’t super common but it may be easy to accidentally overload on them as well.

Because isolated Mo deficiency has not been associated with clinical disease, it has been assumed that humans eat enough Mo in their daily diet to meet all of their needs. Findings from sheep studies would challenge this assumption. Human Mo ingestion rates have been established in two major surveys: one in the United States and the other in the United Kingdom. It can be calculated from the results of these two surveys that the Mo content of the daily average diet in the United States is 0.07 ppm and that of the United Kingdom 0.04 ppm. However, CNS disease occurs in Mo-deficient sheep that are ingesting dietary purines, when the dietary Mo level falls below 0.04 ppm. 10

Is molybdenum deficiency adding to a growing list of horrible symptoms?

I’ve been taking only 25mg once a week or so and coincidentally haven’t had a migraine in about a year.

Uncategorized
How I look at natural health